Slugs and Snails are not insects but molluscs and thus belong to the same group as shellfish such as oysters and clams. Slugs usually range from a quarter inch to four inches in size, and because they don’t have the advantage of a snail’s protective shell, they have a greater requirement for damp places in which to rest during the day. They feed during the night, creating holes in foliage and chewing on leaf edges, causing them to become ragged. Feeding between the veins can cause shredding of the leaves. One can usually verify their presence from the shiny trail of slime they leave behind them on their travels. Damage can be significant, and tends to be worse in spring and fall when conditions are damper and especially where there is heavy use of organic soil amendments such as compost and manure. There are several different species. Slugs are usually gray with some darker markings, although some are more yellowish and some are almost black in color. Frequent cultivation may expose eggs and even slugs themselves to the elements and predators. Remove as many hiding places such as boards, large stones etc. as you can, although leaving a board or two and checking underneath it each day may allow you to capture and dispose of any slugs which find it a convenient resting place. Reduce mulches to minimize damp locations. Snails can be handpicked, but this may be rather more difficult (and unpleasant!) with slugs. Diatomaceous earth can be effective, and they are said to be repelled by an oak leaf mulch and certain plants such as artemisia. 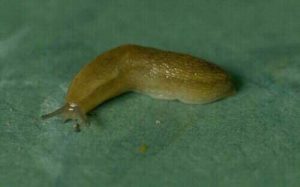