The name given to a disorder of daylilies which appears soon after growth commences following winter. One or more fans fail to maintain the same rate of growth as others in a clump, and frequently bend and grow sideways. Leaves emerge with brown ragged edges and holes, and on some fans the central leaves may wilt and detach having decayed at the base. Affected fans may grow out of the condition and even bloom, but some remain stunted or disappear although the plant as a whole generally survives. The cause has not yet been proven but the damage appears to be initiated before spring growth emerges above the ground. There is no evidence to support the popular idea that the initial cause is fluctuating temperatures after new growth has emerged in the spring.

A “task force” of AHS member volunteers is currently working on this problem, and has a developed a helpful web site to provide information on the latest developments: http://web.ncf.ca/ah748/sstf.html Additional photos of Spring Sickness for identification purposes are also on this site. 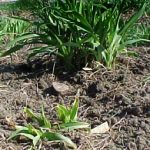 Clump (foreground) stunted by spring sickness. The center leaf of the closest fan can be seen bending sideways. 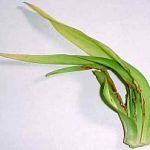 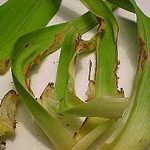 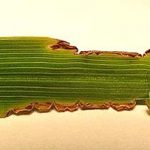 (All photos above by Susan Bergeron, used with permission.) 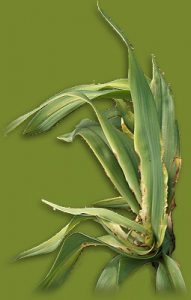