A fungal pathogen that attacks daylilies.

Daylily rust is caused by the fungus Puccinia hemerocallidis and affects the leaves and scapes. It is not a new disease of daylilies, having been reported previously in China, Taiwan, Korea, Japan and Russia (Sakhalin, Kuriles and Siberia*). Unfortunately, the disease has now arrived in North America, and was first identified in the southeastern United States in August 2000. In nature, the main method of rust spread is by wind borne spores. 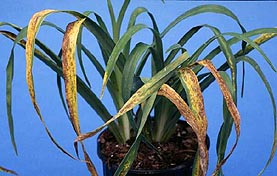 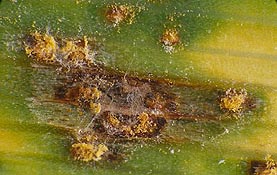 Close up of pustules on leaf. Above photos courtesy of the Florida Department of Agriculture and Consumer Services Division of Plant Industry, used with permission. All photos by Jeff Lotz, DPI. 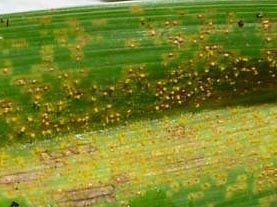 Reports from AHS members indicate that in North America daylily rust has successfully overwintered in USDA Hardiness Zone 7 and milder. At the current stage of our knowledge, it is safest to assume that if any daylily foliage remains green through the winter in an already infected garden, there is a possibility the rust could survive inside those leaves. In very mild winter climates the familiar yellow-orange powdery “summer spores” (urediospores) produced from the spots (pustules) on daylily leaves may cause repeated infection cycles year round. A spore is similar to a plant seed, and like a seed requires moisture and appropriate temperatures in order to germinate. It is not yet known how long daylily rust urediospores can remain alive on leaves until conditions become suitable for germination and infection, or exactly how far they can travel on the wind to new daylily leaves. Rust spores can often travel many miles on air currents.
Rust diseases may also survive winter as mycelium (the strands which form the body of the fungus inside the leaf) but this can only take place where some infected leaves remain alive through the winter such as in milder climates, or where there is protection from greenhouses, deep snow cover, heavy winter mulch, or proximity of infected plants to the warming walls of a house, for example.

Another means by which rusts can overwinter is in the form of “winter spores” (teliospores). These are dark colored spores which most commonly appear at the end of the growing season in response to shorter days and cooler temperatures. The spots and streaks containing teliospores on a daylily leaf are blackish, in contrast to the more familiar orange pustules of urediospores. “Winter spores” are hardier and more durable than the “summer spores” and lie dormant on dead daylily leaves over winter. In the spring they germinate to produce another type of spore but this cannot infect daylilies. Instead, these new spores must be transported by the wind or other means to a plant of the alternate host, Patrinia, which is a perennial plant also of Asian origin. After completing the next stage of the life cycle on a Patrinia plant, the rust can then pass back to daylilies. Thus it is possible that in climates where the rust cannot survive the winter as mycelium or urediospores, it may still be able to continue the infection in the subsequent year if there is a plant of Patrinia in the vicinity.

Patrinia is not common at the moment in North America, but several species are being offered for sale both as plants and seeds. Not only does it pose a threat to daylilies as far as overwintering of the rust is concerned, but the rust life cycle stage on Patrinia is a form of sexual reproduction which may increase the chances of daylily rust becoming able to infect currently resistant daylily cultivars. However to date we are not aware of any patrinia plants having been infected with daylily rust in North America. At one time, Hosta was also thought to be susceptible to daylily rust, but further research has shown this is not the case.

When acquiring new daylilies, whether by trade or purchase, it should be born in mind that these plants could be carrying a rust infection even though it isn’t necessarily visible at the time of receipt. There have been numerous reports of rust first becoming apparent several weeks or months after the plants have arrived. The fungus may be alive inside a leaf, or spores be hiding on a leaf, without showing any obvious signs externally. An early infection may go undetected until the rust begins to form more spores, at which time it produces the characteristic yellow-orange pustules. From this point on, the infection may soon spread throughout one’s garden or nursery. It is advised as a precaution to isolate all new daylilies well away from existing daylily plantings for several months or a growing season to minimize rust spread if they turn out to be infected.

On receipt of new daylilies, some growers are peeling the outer layers of leaves from new plants right to the crown, and then cutting the remainder about one to two inches above the crown. The plant may then be soaked in fungicide if desired. This procedure may add to the transplant and shipping shock of the divisions, and that risk should be weighed against the desire to protect one’s garden and neighborhood from possible rust infection. Although there is no guarantee this treatment will prevent rust on new plants which have been exposed to the disease, it should significantly reduce the risk. Fungicide or disinfectant treatment prior to shipping does not guarantee a rust-free plant, and overseas purchasers should not assume a phytosanitary certificate indicates a clean plant.

Check new plants daily for rust especially the undersides of the leaves. Some gardeners report missing the rust because it was not visible when looking down onto the top surface of the leaves. Early signs of rust, prior to pustule development, are leaf spots which could be mistaken for some other disorder. Rust pustules are raised, and this can easily be seen with a small magnifying glass. A few other substances on leaves may appear raised, such as other plant seeds, pollen, and even fertilizer or pesticide residues. Yellow-orange powder (large numbers of spores) comes off on a white tissue when a rust infected leaf is wiped.

Differences in rainfall, humidity, temperatures and cultural practices will cause the severity of the disease to vary between gardens. Because fungicide availability and labeling differs regionally it is best to contact your local Extension Service or Ministry of Agriculture for the most recent advice on treating daylily rust. Trial results from Drs. Buck and Williams-Woodward at the University of Georgia were published in the Spring 2002 issue of the AHS Daylily Journal. The summary indicated that “daylily rust can be controlled under greenhouse conditions by fungicide applications, in particular, mancozeb, chlorothalonil, azoxystrobin and triadimefon.” Products should be rotated to reduce the risk of fungicide resistance developing. Alternate between a systemic fungicide and a contact or protectant fungicide. Application may need to be repeated as often as every seven to fourteen days – follow product label instructions. It is often recommended to remove the foliage from all plants discovered to have rust at the first sign of infection, cutting just above the soil level. Similarly cut all apparently healthy plants in the vicinity. However, if the infection continues after this initial cutting back, it is not recommended to continue repeatedly removing all the foliage. For those who do not wish to use fungicides treatment may be limited to continuous removal of individual infected leaves as they are noticed. Removed leaves should be destroyed, preferably by burning or burying where this is possible. Spores can remain alive for a while even on a dead leaf and spread from there on the wind. Opinions differ regarding the safety of composting infected leaves. Some people are spraying the plants with a fungicide before cutting the leaves in order to reduce spore numbers around the remaining stubs of plants, and then spraying again afterwards. Fungicide applications will not be as effective if the foliage is not removed from the plants. Because leaf moisture for several hours promotes rust spore germination, overhead watering should be avoided wherever possible. If it cannot be avoided (by use of soaker hoses etc. which keep the foliage dry) then timing should be such that the leaves remain wet for the shortest possible time – i.e. do not overhead irrigate late in the day or in the evening. Also, plant spacing should be sufficient that leaves dry quickly following rain or irrigation.

While daylily rust may kill the foliage on some cultivars, it is unlikely in the short term to actually kill the infected plant. However, it is not yet known what the effects of continuous infection will be on individual daylilies. It is possible that some may become weakened and thus susceptible to other stresses and diseases, or that bloom could be reduced. Looking into the future, steps are already being taken by some hybridizers to monitor plants for rust susceptibility in the hopes that it will be possible to breed rust resistant cultivars. Unfortunately, many Hemerocallis species are reported to be susceptible to the rust in its native habitat, so whether any of these will be useful in the development of new cultivars is not yet known.

The above site also contains much more detailed information on the life cycle (including images of the rust on the alternate host, Patrinia), fungicide information, a list of reported host species, images of the leaf peeling process for new plants, contact information for local assistance, notes from presentations by plant pathologists about daylily rust and much more which is beyond the scope of this definition. The AHS provides this link as a source of information. The AHS does not have any control of the content on the site.

We do not have all the answers about this fungus yet, but we will try to keep this page updated as new developments arise that may change growing methods, prevention methods and practices related to rust.