The European Earwig is not a native insect, but introduced to North America and first discovered in Rhode Island in the early 1900’s. There are also native earwigs, but they are considered mostly beneficial. The European Earwig, Forficula auricularia, is about three quarters of an inch long and has pincers at the rear. They feed mostly at night, and are often especially abundant near outdoor lighting. Their life cycle is particularly interesting in that the mother actually tends the young until they are old enough to fend for themselves. There may be one or two generations a year. The young earwigs damage many different plants mostly by eating holes in leaves. Adults feed on flowers and fruit, and can often be seen in daylily blooms early in the morning. Where an earwig or two can be seen in a daylily bloom, there will frequently be many more hiding in the bases of fans between the leaves where their droppings make a considerable mess. Insecticidal soap is effective if you can score a direct hit. 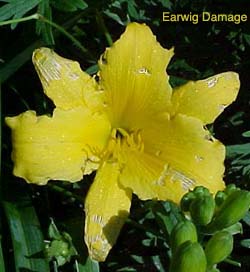