The shape or structure of a daylily flower. The AHS officially recognizes the following forms for registration and exhibition purposes: single, double, spider, unusual form, sculpted and polymerous flowers. 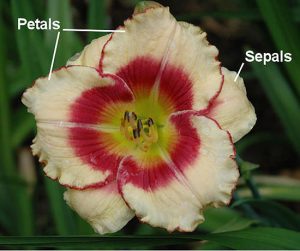 Double — Double daylilies, like single daylilies, come in different forms. ‘Hose-in-Hose’ doubles have extra whorls (layers) of petals so that there appears to be a flower within a flower. ‘Peony type’ doubles have petaloid (petal-like) stamens inside the normal petal whorl. Carpels may also be petaloid. 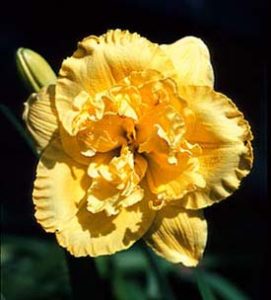 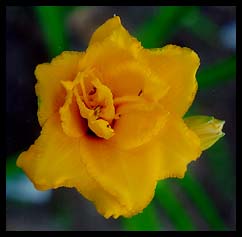 Spider — A flower whose petals have a length-to-width ratio of at least 4 to 1 (i.e., 4:1). Length is measured with the segment fully extended. Width measurement is taken as the flower grows naturally. (Older literature may designate “Spiders” as having a ratio of 5:1, and “Spider Variants” as having a ratio of 4:1. AHS merged the two classes into the one spider class in 2003.) 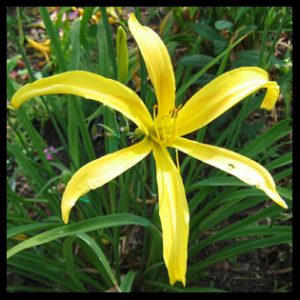 Unusual Form — A class of daylilies based exclusively on the shapes of the petals or sepals. These shapes include Crispate (pinched, twisted, or quilled), Cascade, and Spatulate. One or more of these shapes must be displayed on at least 3 petals or 3 sepals.

Twisting – Floral segments which present a corkscrew or pinwheel effect.

Quilling – Floral segments turn upon themselves along their length to form a tubular shape.

Cascading/Curling – Narrow floral segments with pronounced curling or cascading, which revolve upon themselves in the manner of a wood shaving.

Spatulate – Floral segments markedly wider at the end like a kitchen spatula.

In the above drawings, the far right illustrations are by Kathleen Schuller, second from the right are by Marc King 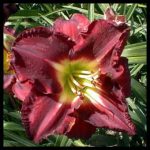 A 4×4 polymerous bloom. Photo by Melanie Mason, used with permission. 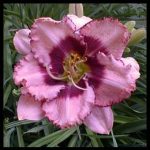 Sculpted: A term used to describe three-dimensional structural features involving or emanating from the throat, midrib or elsewhere on the petal surfaces. Sculpted forms belong to one of three different groups: Pleated, Cristate and Relief.

PLEATED: In the pleated group, petals have a deep longitudinal crease on each side of the midrib. These creases cause folding of the petal upon itself creating a raised platform extending from the top of the perianth tube and ending between the throat and the petal tip.

CRISTATE: This category refers to flowers having appendages of extra petal tissue growing from the midrib or elsewhere on the surface of the petals.  (Cristate, referred to by many as “Cresting,” can occur on single and double daylilies, and thus does not, in itself, constitute a double daylily.

RELIEF:  Daylilies falling into this category are characterized by vertically raised ridges that extend from the throat and project from the petal surface. The ridges may grow parallel to the veins, or they may radiate outwards from each side of the midrib.

Multiform: This term is used where the daylily in question has been registered correctly as exhibiting 2 or more of the forms spider, unusual form, polymerous, or double.” An example of a multiform is a daylily that is both a spider and an unusual form, or a polymerous double, etc, but a single spider, etc. is not a multi-form. 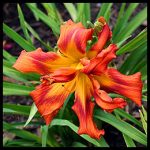 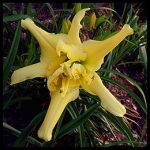 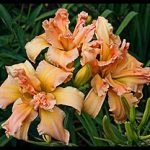 Sebastian The Crab (Joiner-J. 2003) is registered as a Double & an Unusual Form. 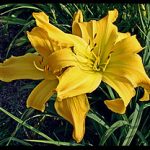 All four photos above by Julie Covington, used with permission

Circular: When viewed from the front of a bloom, the flower appears round. Segments tend to be short, wide and stubby, and generally overlap, giving a full appearance. 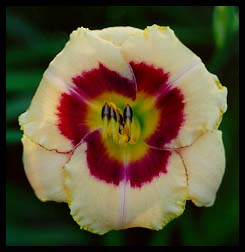 Flat: When viewed from the side of a bloom, flowers are perfectly flat except for the concave throat. 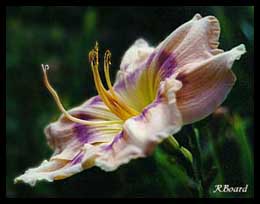 Photo by Rebecca Board, used with permission

Informal: When viewed from front of bloom, flower segments have no definable shape. Segment placement may be irregular, widely spaced or floppy.

Recurved: When viewed from the side of a bloom, flower segments flare, but the ends of some segments roll back or tuck under. When the sepals are all recurved, and the petals are not, the result is a triangular form, when both sepals and petals recurve, the result is often the round form. 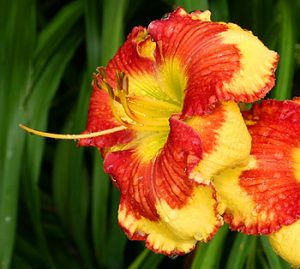 When viewed from the side you can see that both the petals and sepals roll back showing the recurved form.  Below is the same plant taken front on. 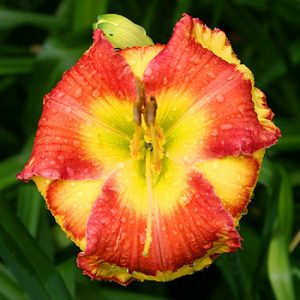 Star: When viewed from front of bloom, flower segments tend to be long and pointed. There is space between the segments, and the shape looks like a three-pointed or six pointed star. 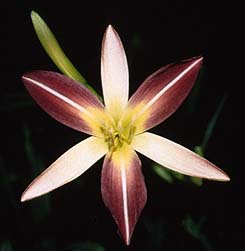 Triangular: When viewed from the front of the bloom, the flower segments form a triangle. The sepals generally recurve. 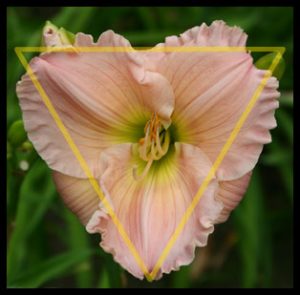 Trumpet — When viewed from side of bloom, flower form resembles a true lily. Segments rise from throat in an upward fashion with little flare. 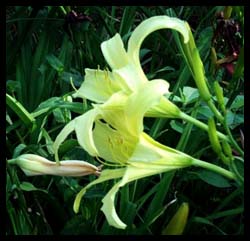