The sudden bursting, splitting or severing of a daylily scape. Scape blasting is usually caused by heavy rain following a period of drought causing a rapid increase of internal pressures within the scape. Fertilization just prior to or during a swift increase in soil moisture may contribute to scape blasting. Sometimes the rupture is complete, and all blooms are lost. At other times the rupture is partial and the daylily will continue to bloom. Should the scape not separate completely, the break can be supported with ice cream stick splints and duct tape. Scape blasting has been attributed more often to tetraploids than diploids, possibly because of their thicker, less flexible cell structures. 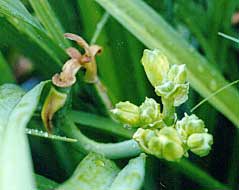 The image above shows a blasted scape a few days after the scape has burst. The buds continue to be fed, but they are held on by only a small section of the original scape. Photo by Rebecca Board, used with permission 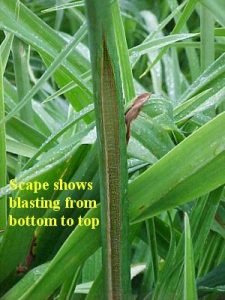 This image shows a scape that has blasted from top to bottom (or vice versa). Most often a blasted scape resembles a spent fire cracker, with sections of the scape being blown out in a number of directions, but internal pressure can also cause the scapes to split vertically as shown. Photo by George Lawrence, used with permission. 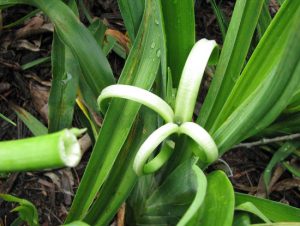 This image from Karen Sherrill, shows the split scape and curls often seen in a blasted scape. The upper part of the scape is shown as well. 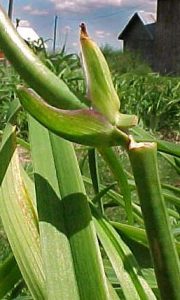 This image shows another blasted scape.
Photo by Sue Bergeron, used with permission. 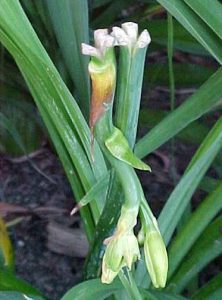 George Lawrence provided this image of a blasted scape that shows the splitting and burst effect. Photo used with permission.