Aphids are small, mostly less then one tenth of an inch, soft-bodied insects of the family Aphididae. The daylily aphid, Myzus hemerocallis, is, not surprisingly, often found on daylilies but there are many other kinds of aphids; some of which may also affect daylilies from time to time. The daylily aphid is light green in color and feeds in colonies between the leaves of the plant, inserting the mouth parts into plant tissue and sucking up the juices. Whitish specks are often noticed on the plants when aphids are present. These are the cast skins left behind after molting. (See lower image below.) They also excrete a sticky substance called “honeydew”. The image accompanying this text is of the related green peach aphid (Myzus persicae). The life cycle of aphids can be rather complex and can vary somewhat according to species and geographical region. In mild weather aphids can produce continuous generations rapidly by live birth without mating, most of the population being female. With the imminent onset of cold weather in Fall, males may be produced, mating occurs and the females lay overwintering eggs. In warm climates and in greenhouses, some species may omit the egg-laying stage and continue to reproduce by live birth through the winter, although where it is slightly colder they may hibernate as adults. Most aphids are wingless, but sometimes you will see winged forms. Natural enemies may keep populations down to levels where no treatment is necessary. Aphids are especially partial to plants fertilized with large amounts of nitrogen. If control is desired, insecticidal soap can be effective if the aphids are located where they can be directly hit by the spray. Numerous other low or non-toxic remedies are discussed in various references including repellent companion plants such as the allium (onion) family, coriander and anise.

Photograph: Used with permission from University of California Statewide IPM Project, Jack Kelly Clark photographer. Any additional uses of this image must be received from the copyright holder directly – AHS does not have permission to grant additional usage of this image for any purposes. 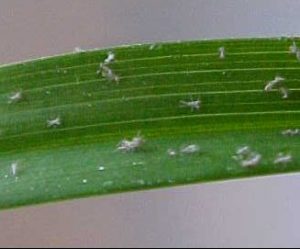 Aphid’s cast skins, left after molting, are shown in the closeup.- Photo courtesy of Sue Bergeron, used with permission.