In the last few years, reports of leafmining damage to daylily leaves have been received from several states. This damage appears as whitish meandering, serpentine trails caused by larvae feeding between the upper and lower surfaces of daylily leaves. 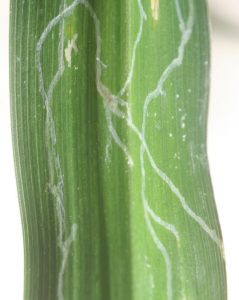 The small, pale yellow larvae (up to 5mm) travel up and down in leaf blades, leaving long mines which become progressively wider as the larvae grow. This damage remains until the leaf dies. Pupation occurs in the larval tunnel, with the pupa appearing like a small (3-4mm), tan rice grain, under the surface, often near the leaf base. 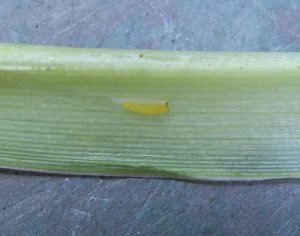 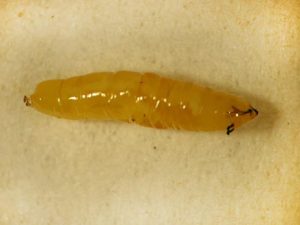 Fig.3. Large larva removed from mine (mouthparts and front spiracles at right). Image by Gaye Williams, used with permission. 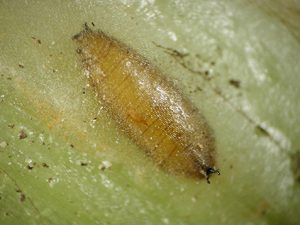 The adult fly (3-4mm) is small, black, and rather stocky with broad triangular clear wings. Adults may be seen walking up and down daylily leaves or resting on blooms. There may be one to several generations per season, depending on your growing region. The species might overwinter as pupae in crowns or dead leaves. No effective chemical control methods have been formally tested yet. Larvae and pupae would be unaffected by contact insecticides which would likely kill predators and tiny wasp species that have been found to attack this pest. 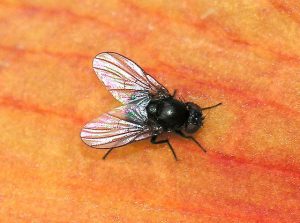 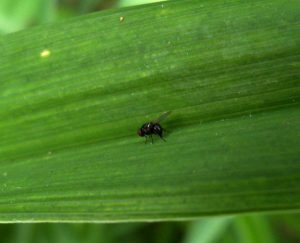 Removal and destruction of infested leaves can reduce fly numbers in the garden. However, larvae have also been found in naturalized roadside daylily populations.

Careful examination of newly purchased daylilies will enable visibly infested leaves to be removed and destroyed, reducing the potential for bringing the pest into one’s garden. Unfortunately, small larvae can easily be overlooked in the pale tissue at the plants’ base. As more information becomes available, this entry will be further updated.

We would like to thank Gaye Williams of the Maryland Department of Agriculture, Plant Protection Section for assistance with this update. Further details concerning this pest can be found in the National Plant Diagnostic Network Newsletter September 2011 at http://entnemdept.ufl.edu/hodges/september_2011.pdf.

Gaye would also appreciate anyone seeing daylilies with leafmining damage contact her and send photos (not specimens), so she may track the spread of this pest. 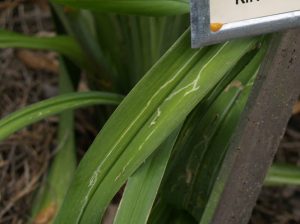