In a daylily bloom, an opaque color pattern originating in the throat and extending outward onto the midrib and tepal surfaces. The strong contrast and sharp distinct edges of an appliqued throat show no color bleeding into the surrounding petal tissue.

The term “applique” comes from the French word for “apply”, and in art refers to one material applied to the surface of another. Hybridizer Bill Munson used the term to describe throats in daylilies such as Hemerocallis ‘Chinese Temple Flower’ (Munson-I. 1980). An appliqued throat has the appearance of being raised and applied or painted onto the surface color(s) of the tepals. The applique can be variable over time and location.

The important distinction between appliques and normal extended throats is that there is no bleeding of color from the throat to the petal color and that there is a strong contrasting color separation, not soft blending. Examples of extended throats that are not appliques can be seen in H. ‘Emerald Starburst’ (Doorakian 2004) and in ‘Kermit’s Scream’ (Norris-R. 2006) 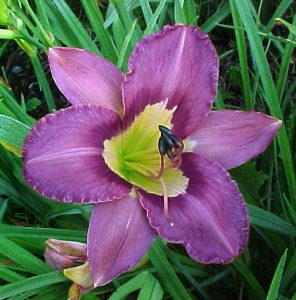 H. ‘Catcher in the Eye’ (Kinnebrew-J. 2001). Used with permission from Charmaine Rich 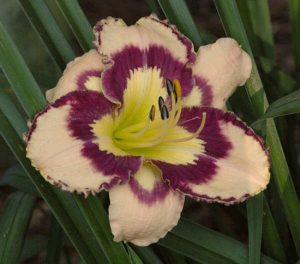 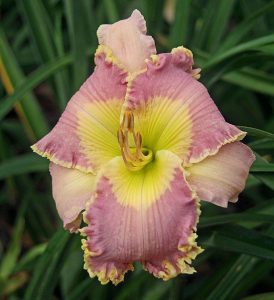 An appliqued throat can occur on a daylily with no eye as in H. ‘Spacecoast Miss Margaret’ (Kinnebrew-J. 2008), Used with permission from Julie Covington. 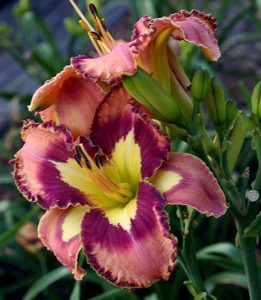 …or, with an eye, as in H. ‘Spacecoast Behavior Pattern’ (Kinnebrew-J. 2006). Used with permission from Julie Covington. 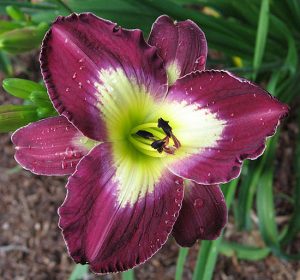 …or with a watermark, as in H. ‘Chinese Scribe’ (Munson-R.W. 1991). Used with permission from Charmaine Rich.

Daylilies with extended throats that are not appliques are exemplified by: 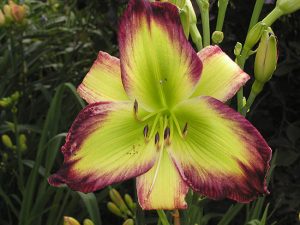